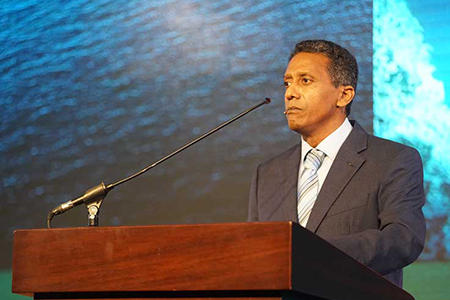 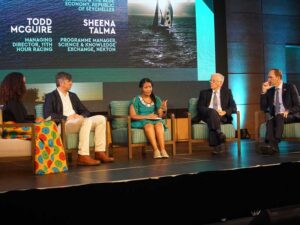 The Ocean Race Summits Seychelles, held on the 21st of March,  in Victoria, called for greater impetus and collective action to protect the ocean health.

The high-level event brought together world leaders, ministers, scientists, sailors and ocean advocates urging a united approach to protect our one Ocean.The Summit was organised by The Ocean Race, the world’s toughest test of a team in sport and an industry leader in sustainability, developed in collaboration with 11th Hour Racing, a Premier Partner of The Ocean Race and the Founding Partner of the Racing with Purpose sustainability programme. 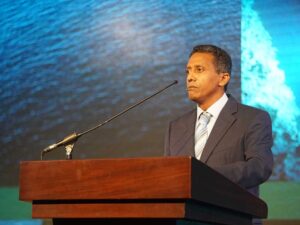 Held in collaboration with the Danny Faure Foundation, and hosted by the Government of Seychelles, the Ocean Race Summit addressed issues affecting the ocean and featured two panel discussions on ocean rights covering subjects on relationships, values and protection, and governance and economic opportunities. The Summit also celebrated women’s leadership role in ocean conservation.

Speaking at the Summit, the Founder and Chairperson of the Foundation, Former President Danny Faure expressed his gratitude to The Ocean Race for the opportunity to collaborate with the organisation on such an important event that will lead to a possible future Universal Declaration of Ocean Rights. Former President Faure equally thanked the President of the Republic of Seychelles, Mr. Wavel Ramkalawan for welcoming the Summit. 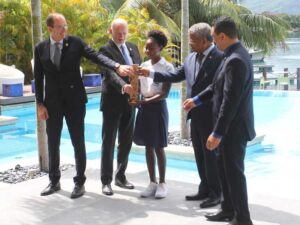 “We all recognise and value the interconnectedness of the ocean and socio-economic, indeed human, development. It is imperative that we attain equilibrium between effective ocean conservation and the sustainable development of our marine resources. More needs to be done to accelerate efforts to protect the health of the ocean as we are running out of time. Small island states like Seychelles risk losing everything if global action is not amplified – our livelihoods, our homes, and our hope for a safer, more just and sustainable future for our children and theirs’.

Held in the sidelines of the Summit was the Relay4Nature ceremony- an initiative developed by The Ocean Race in collaboration with Ambassador Peter Thomson. Relay4Nature champions the ocean and urges leaders to take urgent action needed to protect nature.

The Relay4Nature ceremony included the passing of the Nature’s Baton – a symbol of the initiative- from Ambassador Thomson to President Ramkalawan and to the Principal Secretary of the Blue Economy, Mr. Kenneth Racombo and finally to a youth representative from Mont Fleuri School, 12 year old Ms. Dorianne Bristol who pledged “We, the Youths of Seychelles pledge to be responsible and proactive guardians of our ocean, marine life and natural environment. To protect and safeguard our biodiversity for future generations, to educate the young and the old, on the importance of conservation. Together, we promise to be ‘Champions for the Sea’ “.