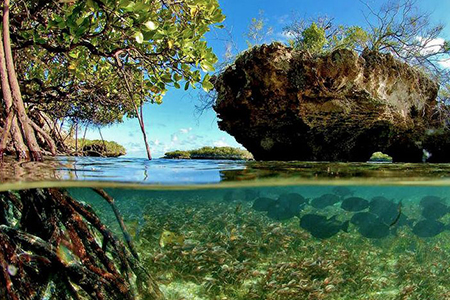 The Danny Faure Foundation would like to extend its congratulations to the Seychelles Island Foundation’s Aldabra research station as it celebrates 50 years of conservation success and scientific excellence, since its establishment by the Royal Society of London.

The scientific work of the country’s local scientists and rangers, in collaboration with foreign scientists and organizations, has contributed greatly to our understanding and knowledge of the status and health of the various species and ecosystems on Aldabra- a UNESCO World Heritage site.

In 2017, former President Danny Faure, had the opportunity to visit the atoll and the research station to see first-hand the different activities, infrastructure and technology at the station including the ground solar photovoltaic (PV) system that fully powers the station.

We are pleased to see that with the advancement of science and technology, the Seychelles Island Foundation has continued to invest and incorporate new technologies into the works at the station and on the atoll in general. We also recognize the success of the Seychelles Island Foundation in increasing the interest and involvement of young Seychellois scientists and rangers working at the station and on the atoll. We believe that it is very important to continue to support and to give opportunity to our young people to participate in the scientific works on the atoll. Over the years, the country has witnessed the station successfully support national biodiversity conservation research goals to provide us with a wealth of information, knowledge and data on the wonders of the Aldabra atoll’s amazing terrestrial and marine environment.