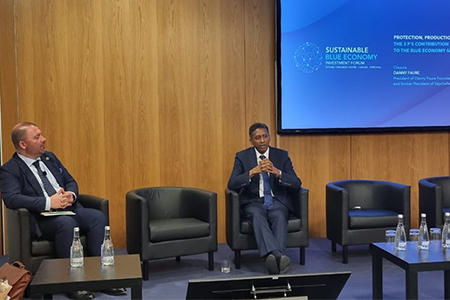 On 28th June 2022, the Chairman and Founder of the Foundation, Former President Danny Faure participated in the Sustainable Blue Economy Investment Forum, on Panel 4 entitled ‘Production, Protection and Prosperity: the 3 Ps contribution to the blue economy’.

In his remarks, Former President Faure stressed on the importance of leadership and partnership for the attainment of the 3Ps.

He further stated that a people-centred approach is crucial as Governments need to aim for production with the right regulatory framework in the interest of its citizens. “We need to ensure that people remain a priority and are not marginalised. Before focusing on the relationship between the ocean and the economy, we need to look at the citizens’ mindset on the ocean”.

Former President Faure also shared his and the Seychelles Governments’ past experiences on achieving the blue bonds, and the 30% marine protected areas through the marine spatial planning exercise that was made possible with the support of The Nature Conservancy.

The Sustainable Blue Economy Investment Forum was co-hosted by the Governments of the Portuguese Republic and the Republic of Kenya and co-organised by AICEP Portugal Global (the Portuguese Trade & Investment Agency) supported by the Municipality of Cascais and the UN Department of Economic and Social Affairs.

One of the aims of the Forum was to launch a process for designing the blue economy’s sustainable framework global standard, that will be used in financial instruments, and investment decisions and businesses.

Former President Faure was amongst the following speakers:

Dr. Richard Spinrad – Under Secretary of Commerce for Oceans and Atmosphere and NOAA Administrator, United States of America

Carlos San Basilio – MD, Corporate Strategy and member of the Executive Board European Bank for Reconstruction and Development