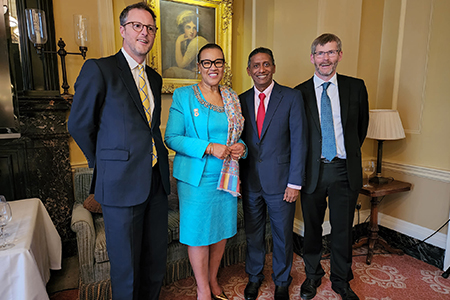 The first International Symposium organised by the Danny Faure Foundation on the theme “The Health of Our Ocean” was held on the 8th of July 2022 in London.

In his opening address, Former President Faure said, “It is undisputable that ocean health equates global health. With an ever-growing body of irrefutable science and data, it is clear that we must jointly act now as there will not be a later time to solve what I believe is the existential threat of the 21st century.”

“There needs to be an urgent improvement in access to information to allow people to better understand the value of the ocean in order to identify the right mechanisms to properly conserve and sustainably develop marine resources and ecosystems”, said the Former President of Seychelles who is also the Founder and Chairman of the Danny Faure Foundation.

The keynote address was delivered by The Right Honourable Patricia Scotland QC, Secretary General of the Commonwealth.

In her address, The Secretary General, welcomed the initiative of the Foundation in organising the Symposium on the “Health of Our Ocean” one week after the United Nations Ocean Conference, which was held in Lisbon. She reiterated the importance of building partnerships and of “joining hands and moving forward together that we can build a healthier, happier, more resilient, more prosperous and more beautiful blue future – for the Commonwealth, and for everyone.”

The participants at the Symposium also had the opportunity to listen to two presentations by Mr. Chip Cunliffe, Programmes & Risk Director at the Ocean Risk and Resilience Action Alliance (ORRAA) and Mr. Johan Strid, Director of the Ocean Race Summits.